A Network Bypass Switch ensures failover or fail-safe capabilities for an inline networking device or a network security tool such as a firewall, NGFW, IDS/IPS, WAF, DDOS and many other flavours of threat detection platforms. If the network or security appliance fails or needs to be taken off-line for whatever reason, its traffic is automatically rerouted, ensuring uninterrupted traffic flow on the network.
Continue Reading
What is a Network Bypass Switch?
Redundancy is essential and highly critical aspect for any network that needs to operate all the time. Bypass Switches sometimes also referred to as a bypass tap, the network bypass switch, is a special type of active tap. It is used to connect a network segment at a specific network access point (TAP) where there is an active, inline device (such as a security tool that is there for inspection and monitoring purposes).

Functionally, it can reroute traffic automatically by monitoring the tool’s health or can manually be made to redirect traffic (such as when disconnecting the monitoring tool for maintenance or other motives). Since the inline network devices are essential to the overall functioning of the enterprise network – any issue with them can critically network performance.

Each network device that is placed inline is a potential single point of failure in the computer network. If the device should experience even the shortest period of system hang-up or failure (that takes time for a reboot or any kind of troubleshooting), then traffic flow will be discontinued. Even for maintenance or replacement purposes, disconnecting the device will interrupt normal traffic flow at that point.

In case the bypass switch itself is somehow compromised, it contains a relay switch that is designed to close and go to 'bypass mode' and allow the traffic to seamlessly flow through its cable to maintain an uninterrupted and open link with the rest of the network. This is especially important with regards to security devices that need to continuously defend the network against malevolent attacks and security breaches. 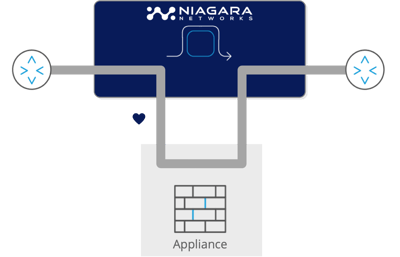 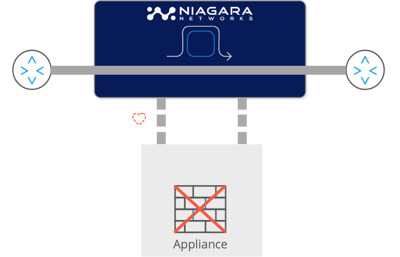 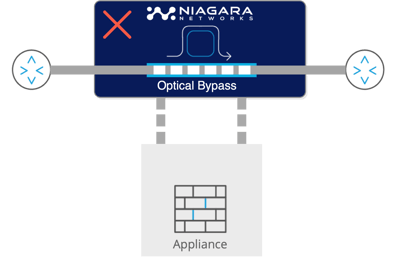 In the case of power failure of the bypass switch itself,
the traffic between the network elements continues to flow thanks to optical/copper relay

When power fails, the optical-relays in the bypass switch ensure that the network flow continues uninterrupted. The optical relays can be configured fail open or fail close to meet specific deployment needs.

This ensures uninterrupted network services under all conditions. 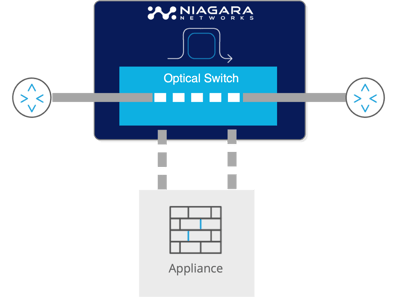 The BypassP2 transmits a user-configurable heartbeat on the appliance ports. In the event of an appliance malfunction (such as a software crash, system failure or loss of power), the failure is detected, and the BypassP² redirects the traffic intended for the inline appliance to the network ports, allowing it to continue to flow through the network link. This feature also enables the network appliances or network security tools to be removed and replaced without network downtime. Once the system is backed up, or the power is restored to the appliance, it is detected by the BypassP² heartbeat mechanism, and network traffic is seamlessly diverted back to the inline device, allowing it to resume its critical functions.