A network tap is an external network device that creates a “copy” of the traffic for use by various monitoring devices. It allows port mirroring and is an intrical part of an organization's network stack.  The tap device is introduced at a point in the path of the network that is felt should be observed, so that it can copy data IP packets and send them to a monitoring device. The network designer will decide where that significant point for the network tap should be placed in the network infrastructure, based on the reason for network interface observation: data gathering, analysis, general network monitoring (such as for saturation and latency), or more critical, such as for intrusion detection, etc.

Although it taps into the traffic, the network tap does not modify it in any way, and the traffic on the network is unaffected by the act of monitoring or port mirroring. Since the monitoring is performed on a copy of the traffic by a device external to the network, via a tap network adapter, this deployment is often referred to as 'out of band'.

In this manner, it acts as an ‘unobtrusive observer’ of the traffic, and just feeds a copy of the data to whatever device is attached to it. This provides full network visibility at that point. At the same time, however, if the tap or monitoring device should fail – it will in no way affect the traffic or its flow and thus ensures that the operating system remains secure.

Taps come in both passive and active versions – each type having its own particular advantages for network monitoring in high density networks.

Another effective type of tap is the fiber tap. Fiber optic taps are coiled into the optical fiber line and mirror all network traffic without introducing a point of failure and provide the secure access of network data in optical networks.

Niagara Networks offers passive or active taps. A wide range of connectors and types are .

Are based on an active switching configuration for generating a “copy” of the traffic. “Copy” traffic is regenerated and there is no loss of signal power. In the case of power failure, “copied” traffic may be lost, but network traffic flows uninterrupted.

Are based on optical coupler (splitter) so that the tapped network point and appliance are always connected. Passive taps don't need a power supply in order for them to work!

In case of power failure and hardware devices ceasing to operate, while the network traffic flow is maintained, the integrated active tap point loses its visibility. 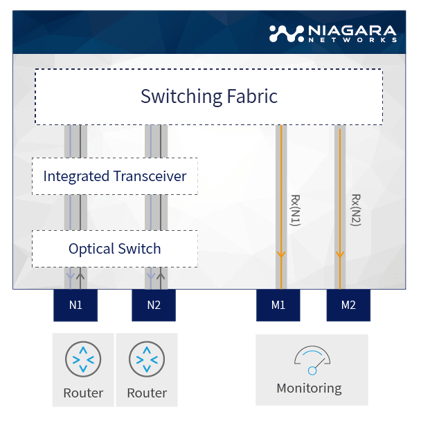 In case of a power failure, the monitoring/tap ports' traffic flow is maintained, since they are directly connected to the corresponding network ports via passive splitters. 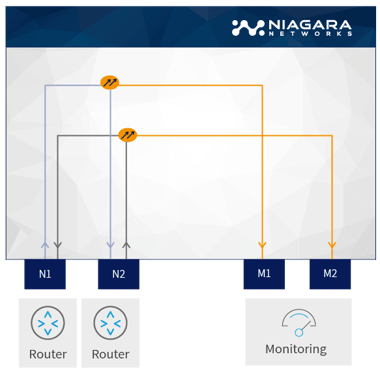 All Bypass products are user configurable as Active Taps